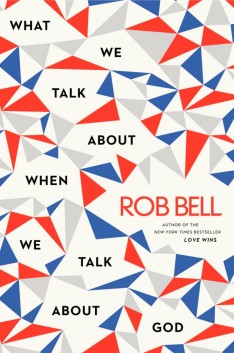 I always liked Rob Bell’s call narrative.  He says that when he was young, he felt like God told him, “Just teach this book.” Forever after, that was to be his call.  Now he has the chance to do it on a wider scale than ever before.  His latest book, “What We Talk About When We Talk About God” was the best chance yet, because the controversy surrounding his last book, “Love Wins,” made him virtually a household name.

What Bell Could Have Done

Bell is now poised in exactly the place every evangelist should want to be: hated by religious teachers, loved by the masses, and enjoying a wide (and lucrative) voice in the public sphere, from which he can preach the gospel without hindrance.  And he honestly starts to do that.  He talks about a God who loves us, a God who took on flesh as Jesus, a God who gives us hope.  He acts like he might intend to entice a modern Millennial audience to follow the God whom they’ve always heretofore been told is an oppressor.

He starts to but doesn’t follow through.  Because when it comes to an obligation to respond to God, he can’t say anything more that lots of people are kind of spiritual (chapter 1).  When it comes to miracles, he can’t say anything more specific than that everything is wonderfully miraculous (chapter 2).  When it comes to God revealing himself, he can’t say anything more than that the biblical writers were coming up with flawed analogies (chapter 3).  When it comes to the Holy Spirit, he here wanders around quite a bit (chapter 4), establishing little more than that life is mysterious and “we” have a sense that history is progressing somewhere.  He finally comes to Jesus, whom he dives into without any explanation of why I should be interested in Jesus more than Buddha or Muhammed, and why I should believe the Bible is at all reliable (chapter 5).  Chapter 6 doesn’t fall within the realm of traditional Christian theological doctrines.  The chapter simply asserts that God is “progressive.”  Finally, in the last chapter, Bell is supposed to tell us what to do with this progressive, hope-inspiring God who never does anything to make us unhappy, but instead is in the business of blowing our minds.  This final, punchline chapter just doesn’t hold together.  He tells the story of the sheep and the goats, but strangely leaves out the goats.  Then he tells the story of a comedic friend who pretends to be a priest and take confession, which shows how much we need to confess.  Then he tells a story about a yoga class in which women weep because they are integrating their bodies with their “being.” Then he talks about how our brains react when we watch each other.  Then he talks about communion, the purpose of which is to open our eyes to the fact that God is everywhere bringing everything together.

This isn’t even liberalism.  This is pantheistic mush.  This is Spinoza and Hegel reheated and dumbed down.

The enemy throughout the book is a group of wildly construed straw men.  They are Christians who protest against peace and hate questions and are out of date and oppose progress.  Who are these people?  Well, they’re not Rob Bell, that’s for sure.  He’s way too cool for them.

What Bell Didn’t Do

What Bell doesn’t do is tell us why on earth anyone should trust the biblical revelation of Jesus once the cultural ship sails towards secularism.  Bell thinks he’s an evolutionary step above the biblical writers.  He credits the explicit self-revelation of God to the writers’ personal impressions.  When they make moral judgments on issues like homosexuality, Bell knows they’re wrong and that God’s revelation has progressed.  Yet it’s not clear why the gospel writers’ impressions of Jesus aren’t also projections.  After all, miracles may just be their antiquated means of describing what they saw.  Bell’s use of Scripture generally is not deferential.  He riffs off of it but doesn’t submit to it.  He’s moved from exegesis to allusion.

Let me use a surfing metaphor, since Bell’s new book is rife with images of water skiing, surfing, and sunbathing from the beaches of southern California, where he now spends most of his time.  Let’s say someone drifts out on a surfboard to enjoy the sun.  Then they keep drifting.  Then they take a nap.  When they wake up, still on the board, land is nowhere in sight.  Now that person is still alive and still floating, but prospects aren’t all that good.

Bell has cut himself loose from a local church, from the accountability of community, from the necessity of responding to critics, and from the canon of Scripture.  Now he’s drifting.  His still alive.  Hey, maybe he’s enjoying the sun.  But he’s getting further away.  And prospects aren’t good.  And sadly, he has a little fleet of floating followers.

In Bell’s mind, all of this is progress.  He’s moved from the hard work of pastoring in the harsh climate of Grand Rapids to the relaxing life of writing books in Laguna Beach.  In fact, Bell is now charging 50 people at a time $500 to spend 2 days with him, which includes casual conversation and a few hours of surfing.  He’s about to do this for the fourth time.  That, ladies and gentlemen, is $100,000 in 8 days to be covered in the dust of your rabbi.  To which land is he anchored?  Not to his original call narrative.

Rather than joining the Bell critics who use the clicheic promise not to drink his Kool-Aid, I’d recommend a metaphor a bit more in keeping with the substance of Bell’s theological work.  Don’t eat the cotton candy.

Leave a Reply to Delight in Truth Cancel reply