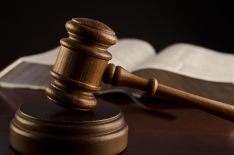 In recent posts on arguments for theism, I’ve been both fascinated and befuddled by responses from atheist critics.  The particular approach that I’ve taken is to show that rational and moral adults act as though God exists even while they may ironically deny his existence.  I have yet to receive any meaningful rejoinders.  But there is one response that I have received consistently, which is, in so many words, “You haven’t offered any evidence for God.”

Now what’s befuddling about this is that, in fact, I have.  The moral argument, for instance, is actually deductive evidence for the existence of God.  The argument goes:

If there is no God, objective moral values don’t exist.

What I’ve said is that everyone, including atheists, generally subscribe to the first premise, and all but the mentally ill subscribe to the second.  In fact, atheists usually complain about God on the grounds of moral principles that they believe hold objectively to all people at all times, including God.  So in fact, I hardly need to prove the existence of God to an atheist – everyone already lives as though God is there.

So I believe I’ve offered a solid if not irrefutable proof of the existence of God.  The onus is on the atheist to demonstrate how on earth he could come up with a moral critique of God on the basis of a material world that generates no objective moral values.