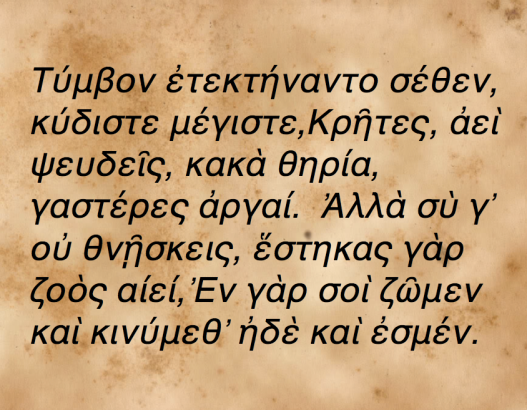 I remember reading about a man badly injured in a car accident.  When asked about the vehicle that hit him, he said, “I didn’t see the truck, just the crash.”  Sometimes we’re so panicked about the crash, we miss what hit us.

The Greek poet Epimenides saw things that most people miss.  He was hailed as a prophet, and legends about him supersede history – that he slept for 50 years, that he lived for 300, that before he died his body appeared tattooed, and that he saw visions.  However, what little we have of his poetry doesn’t suggest mystical visions so much as common sense.  I wonder if prophets are sometimes just people who saw what hit them. 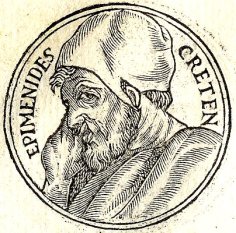 He wrote a poem called the Cretica, The Cretan.  It was a poem about Zeus, king of the gods.  In it, the king of Crete tells Zeus that the Cretans have lied by building a tomb to Zeus.  However, King Minos knows that Zeus is eternal and needs no tomb, because “in you we live and move and have our being.”

Two things interest me about the poem.  One, he doesn’t charge them with a mistake; he charges them with lying.  Given the nature of the issue, I’m not sure who they could be lying to except themselves.  Two, his proof is not data to be analyzed, but existence on the whole.  In you we live, we are active, we exist.  Without you, someone has to explain life arising from inanimate matter, motion, and a universe that has somehow come to be.

Hasn’t it always been the case that when one claims that God is dead, whether a Roman centurion stationed outside of Jesus’ tomb or Friedrich Nietzsche stationed on the doorstep of the 20th century, we’re taking part in a grand self-deception that is corrected by reality itself?  God is the ground on which we stand, and I cannot deny him any more surely than I can stay in mid-jump.  Without God, there’s no reason why there should be a universe rather than not, and no explanation for how something came from nothing.  Without God, there is no explanation for the constant motion in which life is immersed, motion which pushes us, as Sartre said, inevitably towards moral crisis and commitment.  And without God, there is no explanation for how inanimate matter produced consciousness and mental properties, as even atheist philosopher Thomas Nagel has admitted.

The Apostle Paul quotes Epimenides (Acts 17:28) when he engaged the Athenian philosophers on Mars Hill.  He’s proof-texting from their own library.  It’s as if to say, “You already know God is there.  Your own poets have said so.  Your own prophet would call you a liar for denying it.”

I think the charge of lying may be harsh, though technically correct.  I might use a different word for it.  It’s a coping mechanism.  The reality is that crashes are startling and leave us resentful of a fragile world in which they happen.  Denying the possibility of a good, overseeing father figure may be a way of voicing resentment.  It’s fear boiling over into rage.  But at the end of the deny, it’s still just a denial of reality.  Without God, there’s no one to be mad at.