The commonsense view of a scientist is the fictional assumption that she sits in her lab studying matter through her microscope, wholeheartedly and virtuously wed to a pursuit of truth, humble enough to admit where she is wrong and to follow the data wherever it should lead, wanting only, in the end, to benefit humanity. 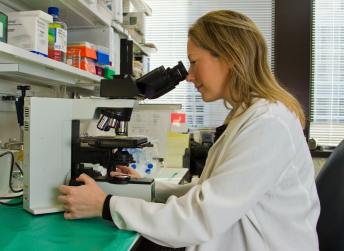 Who put together this PR campaign? Clearly, such a flawless depiction of a hero has to be an accretion of legendary stuff and myth-making. When I see depictions of medieval saints that look like this, I assume a relatively good amount of sweeping under the carpet happened long ago and the facts of history have been lost in the sands of time. For a reputation to be so pristine and so pure, it looks manufactured.

Here’s the real life of a scientist:

She is sitting in a lab that is being funded by someone else, someone with partisan interests tied specifically to making money. That group of people is standing next to the scientist, watching her work and putting a stream of money into her left pocket.

On the other side of her stands a person taking money out of her right pocket. Retailers take it, government takes it, family and friends take it. She has a passionate interest in keeping that river flowing, and that outflow is directly dependent on the inflow.

Over her left shoulder stands a crowd of people who are applauding for her. When she succeeds, makes money, gets published, and gets promoted, they cheer. Over the other shoulder is a group of people booing her. They point out her flaws and hold her up to expectations. People she knows switch back and forth between the two groups. This includes her spouse, children, parents (or their ghosts), employers, employees, peers, the public, and even her own conscience.

On the wall of her lab is a clock, but not a normal one. It is a countdown clock. It ticks down towards her own death, her retirement, her chances for advancement, towards the graduation of her children, towards the due date of the next utility bill. There’s a countdown for the time that she is due to publish her results, and that countdown is tied to a spigot that turns off the money flow into her pocket. That pressure never goes away. In fact, if she is, say, researching a crisis during the crisis, that countdown is shorter than is necessary to actually do circumspect work.

Undergirding her empirical work are two systems that do not answer to her empirical work – ethics and logic. Science does not create reason; it presumes it and depends on it. Where a person is not logical, or fails to be logical, empirical methods follow the leader. Likewise, science does not create ethics. Science alone cannot morally rule that a humanitarian researcher is doing what is right while a self-interested scientist is doing what is wrong. In fact, science as presented in its idealized form depends on a commitment to several moral virtues – humility, open-mindedness, honesty, and the like – none of which are created by scientific investigation. She walked into the lab with her ethics and sense of reason already in place, and they affect what she can do in the lab.

There are two other labs on the same street that are competing with her work. If the other two agree against her work, she is branded as an outlier who perhaps hasn’t done good research, and her work is branded with “most scientists feel otherwise.” If her work shows something normal and unremarkable, often her work is never even published. If the lab down the street comes out with something newsworthy, their money spigot is turned up higher, and hers is turned down. No one is rewarded for saying, “We just don’t know.”

“Hold on!” she protests, looking up for her work, thinking I’ve slipped into the booing crowd. “My work is peer reviewed.” It is, by a group of people who fall into all the same categories of the description I’ve named above.

Just a few notes from history: Isaac Newton was mocked as an occultist by other scientists when he said that objects could exert force on each other without touching each other; scientists believed in an “aether,” a substance that filled all space between objects, from Aristotle till Einstein; some scientists leapt to advocate for Piltdown Man as a missing link before it was shown to be a hoax; and many cosmologists now posit the existence of dark matter, a hypothesis for which there is absolutely no evidence, but which is required unless we’re willing to admit that we’ve been wrong about either gravity or inertia. I’ve heard a prominent scientist recently suggest that he believes in multiple universes, an idea that is borrowed from philosophy and which was created as a thought experiment, not as a description of reality. A lot of scientific peers agreed to all this at one time or another.

So what I mean to suggest is not that the empirical method of hypothesis, testing, observation, and conclusions doesn’t work. I only mean to suggest that science done with zeal and speed is far more prone to error than the Norman Rockwell painting of the scientist most of us carry around in our minds would let on. What’s the take-away? Stop telling me, “Well, science says….”