In chapter 6 of The God Delusion, angry atheist and former scientist Richard Dawkins claims to explain where morality comes from for the atheist as a rebuttal to the charge that atheists cannot be moral.  What he produces is a bizarre intertwining of straw men and other fallacies.  What Dawkins flirts with, and fails to address, is the actual moral argument for the existence of God.

Without God, objective moral values do not exist.

SUMMARY OF CHAPTER 6 OF THE GOD DELUSION

Dawkins begins the chapter by battling people who write hateful comments on atheistic websites.  This is the worst kind of straw man argument.  Instead of taking on any serious kind of theism or religious behavior, he cites inflammatory examples of people who obviously don’t hold to Jesus’ teachings while they attack atheists.  It’s important to note that what Dawkins is doing here is misleading.  It is not a scholarly engagement with meaningful ideas.  It’s no more meaningful than entering into a debate with a middle schooler in a comment thread on YouTube.  This goes on for 5 pages.

Dawkins then proceeds to the argument that morality could develop through evolution.  The “selfish gene,” the gene that survives for generations, does best by programming the organism that carries it to survive.  In some contexts, survival is best promoted by kin altruism, where a society of beings protect one another.  Likewise, reciprocity, in which genes program organisms to return favors for favors, is a beneficial trait for survival.  Or again, generosity may be assumed to allow certain members of a species to show dominance over others, proving that he is the one who is better off and can give more, which is likewise beneficial.  As a consequence of these evolutionary possibilities, morality can exist without God.

Yet when these natural instincts lead us to accidentally care for kin that are not genetically related to us, they are “misfirings.” Dawkins himself even points out that adoption is a human form of genes misfiring, though he claims that he doesn’t mean this to be pejorative.  Yet caring for someone who is in pain but who is not genetically related to us is an example of these “blessed, precious mistakes.”

Here Dawkins starts to betray himself.  He calls compassion and generosity “noble,” but clearly the word is meaningless.

Then it gets worse.  He cites another researcher who claims that morality has a “universal grammar” because it is hardwired into our brains through this evolutionary process.  In other words, we share the same biology, and as a result we all have similar moral inclinations.  Dawkins is here attempting to have the cake of objective moral beliefs and eat it too by saying there is nothing fundamentally binding about them.  They too must be “misfirings,” though Dawkins fails to point this out.  He still wants them to be “noble,” though they are clearly nothing more than accidents.  He uses several hypothetical examples to show that we can have moral feelings that aren’t grounded in clear principles.

Finally he gets to the real moral argument, and totally biffs it.  Again, as he is fond of straw men, he poses the question in such a way that the adherent is portrayed as being moral only to earn rewards from God.  Dawkins then mocks this as petty.  He dodges entirely the fact that moral objectivity is grounded in God’s design for humanity, rather than in simple rewards.  Moral objectivity derives from our beginning, not our end, our creation, not our judgment.

He flubs again when he cites an example of how a near riot broke out when the Montreal police went on strike.  “the majority of Montreal presumably believed in God,” Dawkins asserts.  “Why didn’t the fear of God restrain them…?  This is positively ridiculous.  Canada has for decades been a post-Christian culture, and the claim that a majority of Montreal believed in God is ridiculous.  Furthermore, the bank robberies and looting that took place can hardly be attributed to the majority of Montreal.  Dawkins completely misrepresents this event to prove his own convoluted conclusions.  He does the same thing again when he quotes a study that says crime is higher in states where religiosity is higher.  This is the fallacy of composition – the claim that something that is true of the whole must be true of the parts.  A larger religious population in a state does not imply that all people within the state are religious, nor that the events, good or bad, that happen within that state are a direct result of whomever is the majority of the population.  Here, Dawkins’ ignorance is laughable.  It’s embarrassing to see a supposed scholar come out with something that would have failed him on a freshman philosophy exam.

Perhaps Dawkins realizes that he is losing ground here, because he starts to waiver.  “Even if it were true that we need God to be moral….” Then a page later, “it is tempting to agree with my hypothetical apologist that absolutist morals are usually driven by religion.”

So then he leaps to the other side, “Fortunately, however, morals do not have to be absolute.”

And having now admitted that, Dawkins throws a rod.  He spends the next several paragraphs deriding patriotism for leading to war.  Then he just trails off into criticizing the formation of religious holy books.

Premise 1:  Without God, objective moral values do not exist.  Dawkins supports this premise.  He clearly admits that moral inclinations are misfirings aimed at personal survival.  In A River Out of Eden, Dawkins puts it simply: “There is at bottom no design, no purpose, no evil, no good, nothing but pitiless indifference.  We are machines for propagating DNA.” 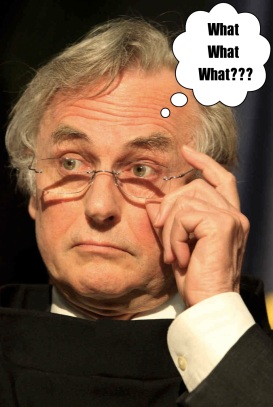 His criticisms of God elsewhere in the book come from his belief that the actions of God in the Bible are objectively wrong.  So while I don’t know that Dawkins would own up to it, all of his seething rhetoric is filled with the belief in objective moral principles that he believes should apply to everyone.

If the two premises are true, the conclusion is logically unavoidable.  God exists.  Binding objective moral values cannot exist in a simply material world.  They must come from design and purpose, and specifically, from a purposeful designer.

So tonight I give thanks for Richard Dawkins, the atheist who proved the existence of God.

16 thoughts on “The Atheist Who Loved God”